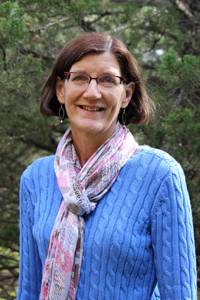 Joan Olson began her journey in spiritual direction in 1991 as a directee at The Cenacle in Wayzata. She received her Master’s Degree in Theology at the College of St. Catherine in 1997 and her certificate in Spiritual Direction at Sacred Ground Center for Spirituality in 2008. Joan has worked in adult faith formation at the Basilica of Saint Mary and as a hospice and hospital chaplain. She has served as both a teacher and a supervisor for Sacred Ground’s training program and has recently been named Education Formation Director for Sacred Ground. Joan has a passion for end-of-life issues, grief work and the questions that arise from life’s losses.

Joan grew up in the Episcopal Church, married a Catholic and spent 40 years in the Catholic church, then returned to the Episcopal church in 2016. She is a member at St. Mark’s Episcopal Cathedral in Minneapolis. Joan and her husband have two sons and two young grandsons.